OK, witches… It’s time to talk about pop-culture and how we are portrayed in the media. No… this isn’t one of those angry rants about how we are erroneously maligned in TV and movies… this is about what they got right. If you haven’t seen the new film The Witch, stop reading this right now and drop what you are doing and go out and see it. Yes, it’s good. No, it’s not exactly a horror movie. (Well, kind of.) OK… you’ve been warned…

This is definitely a “thinking witches’ piece”. The pace is slow, the tension building, drawing from historical accounts of witchcraft at the time it was set (circa 1630, New England). In fact, the subtitle of the film is “A New England Folktale”, which should give us a clue.

It opens with a Puritanical family being banished from their village (for what we don’t know) and them subsequently trekking out to make their living in the wilderness.

We know that life will be hard for them, since they will not have the protection or support of anyone but themselves, but life seems to be ok. That is, until the oldest daughter, Thomasin, is playing peek-a-boo with the baby Samuel and he mysteriously disappears. 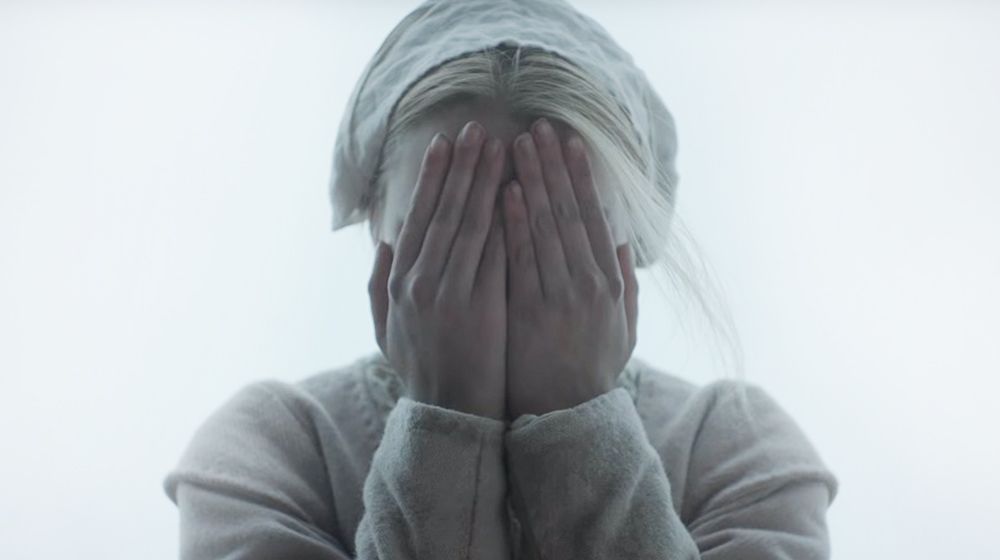 There is no time for the baby to have been taken, but we see rustling grass leading to the edge of the woods and we are treated to the sight of a red-clad figure making their way through the dense forest as the sound of a crying baby fills the twilight. We then see a horrible sight: a nude female figure smashing the remains of the baby in a large mortar and pestle, and then smearing herself with the resulting ointment. Are we witnessing a truth? Or a fantasy of what the Puritan mind might conjure to explain the unexplainable? The family is rightfully distraught, but clearer heads prevail under the guidance of the father, William, and the operating explanation is that the baby Samuel was taken by a wolf and so he and the oldest boy, Caleb, go out to search, only to find nothing.

The mother, Katherine, is broken by the loss and cannot sleep, causing the family great concern for her. At dinner one night she all but accuses Thomasin of stealing a silver cup that had belonged to Thomasin’s grandfather. Thomasin says she hasn’t touched it, but Katherine doesn’t believe her.

After realizing that their crop is being decimated by a blight (ergot fungus?) William and Caleb go out into the woods to hunt for food. Caleb asks his father whether the baby Samuel had gone to heaven, since he was not yet baptized and William reveals that he is the one who stole the cup, having sold it at market for their hunting supplies. They see a hare and while trying to shoot it, the musket backfires, knocking William to the ground.

When they return home Caleb lies to his mother in order to protect his father, saying that they went out to hunt for apples. That night Caleb and Thomasin overhear their parents talking about their intention to send Thomasin away to learn housewifery skills, a common practice of the day. The next morning, Caleb and Thomasin go out into the woods alone to hunt for food. They come upon the same hare he had seen before. Their dog runs after it and the horse panics, throwing Thomasin to the ground and knocking her unconscious. Caleb searches through the woods and finally finds their dog disemboweled. Caleb stumbles on the house of the witch, who emerges as a young, beautiful woman, luring him in for a kiss before grabbing him harshly with old, withered hands.

Thomasin awakens and returns to the farm, but there is no sign of Caleb. Katherine becomes increasingly suspicious of her and accuses her of having something to do with Caleb’s disappearance and again accuses her of stealing the silver cup. William comes clean about his thieving of the cup and Thomasin goes out to check the goats, where she finds Caleb naked, weak, and babbling in the rain.

The young twins accuse Thomasin of being a witch, mainly because she had previously teased them saying as much, and this causes the family’s suspicions of her to grow. When the family tries to pray over Caleb the twins claim that they cannot remember their prayers and again suspicion falls on poor Thomasin. The spell over Caleb seems to be broken after he coughs up a whole apple. He then poetically proclaims his love for Christ before dying in front of them all.

After being accused of witchery, Thomasin accuses the young twins of the same, citing their strange relationship with the family’s goat, Black Phillip, whom they have claimed talks to them in a whisper. In a fit of rage, William locks up Thomasin and the twins in the barn with Black Phillip for the night while he buries his son.

During the night the witch enters the barn and begins drinking the blood of the goats, frightening Thomasin and the twins. In the house, Katherine has a vision of Caleb and the baby Samuel, the latter of whom she breast feeds. Outside of her vision we see she is really in the company of a raven who is pecking at her chest causing her to bleed.

The next morning, William goes outside to see the barn partially destroyed. The twins are gone and he is then attacked by Black Phillip, killing him. Thomasin tries to run to her fathers aid but is stopped by her mother, who accuses her of being a witch. Katherine attempts to strangle Thomasin, but Thomasin grabs a nearby knife and kills her mother in self-defense. Now alone, she goes into the house and –exhausted– falls asleep until nightfall. Upon awaking, she follows Black Phillip into the barn and speaks to him, “I conjure you to speak to me.” To which he replies in a hissing whisper, “Wouldst thou like to live deliciously?” He then prompts her to write her name in his book (she being illiterate cannot, but he will guide her hand) and taking the form of a man instructs her to remove her shift.

In the form of a goat, he leads her through the woods where she comes to a bonfire where a coven of witches are celebrating their sabbat.

They begin to levitate (the visual here is reminiscent of Luis Ricardo Falero’s 1878 painting “Witches Going to Their Sabbath”) and Thomasin follows suit, rising high above the earth as she laughs in the firelight. 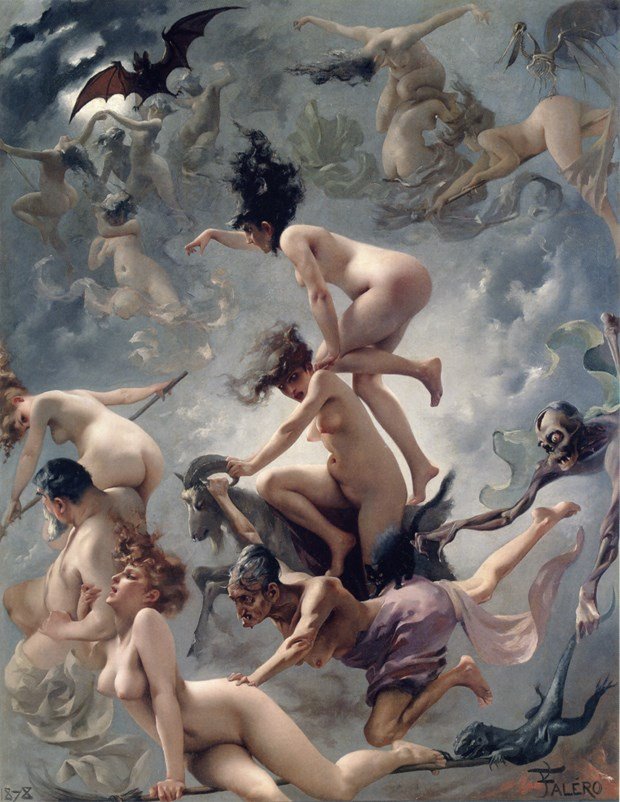 This movie is a visual and psychological treat. Drawing from actual folk-beleifs we see how one family descends into madness. We are never quite sure if the horrors we are witnessing are real or imaginary. A clue is in the blighted corn which we now know was a likely cause of the infamous Salem witchcraft trials. Ergot poisoning produces effects similar to those caused by LSD and would explain the fits and hallucinations suffered by those who were exposed. When we see the witch walking through the woods with the baby Samuel, or see her kissing young Caleb, or drinking the blood of the goats in the barn we might not be seeing a factual truth, but a phantasm brought on by the family’s ergot-fuelled hysteria. This is one of the reasons that I love this film. We are asked to really think about what we are seeing, as nothing is simply handed to us. We, like the family to which we are bearing witness, are likewise descending into a type of madness in which we cannot tell what is real from what is imaginary, a hallmark of folkloric witchcraft in which a poetic truth is held on the same level as a factual one.

Throughout the movie we see how really the only person who is innocent (besides the baby Samuel) is Thomasin, despite her being accused of all the wrong doings and ill-fate that the family suffers. It is the father who steals the cup, not she… her brother Caleb lies to the mother about looking for apples. Katherine misdirects her anger at her and the twins constantly Thomasin engages in some teasing with the twins about her being a witch, but only after being taunted by them. She exists more as a tempting figure, as her brother Caleb begins to become distracted by her emerging womanhood, and she so becomes the perfect scapegoat for the family’s troubles. In the end, she finally speaks to Black Phillip and enters into a pact, but only after the rest of her family has turned against her and is gone. Now on her own she follows him out into the woods where she finds her true power, literally rising above all else as she is transformed into the very thing that they had feared. It is not a fearful experience for her, however, but one of empowerment, and as she literally ascends above all that would keep her down.

This movie got a lot right. First, it’s not about a neo-Pagan practice of the Craft, it’s about the Puritanical fantasy of it and this hits the nail head-on. It’s about fear and how that fear manifested in a particular (Bible-driven) culture. But it’s also a story of empowerment, as we see with the trials and tribulations that the poor Thomasin goes through. Though she has suffered much, in the end she is rewarded with the ability to “live deliciously” and finds her power in the witches sabbat. This is a story about initiation; the trials and challenges that we must all go through on the road to finding our own power. And eventually rising above everything that would seek to keep us down and ‘mundane’. True power must be wrestled away from the grips of our own fear.. we must look down into the deep abyss before we can soar into the star-filled sky. The Witch is an excellent portrayal of this archetypical journey of empowerment, cleverly disguised as a horror film. We should all be so lucky to be invited to the witches sabbat. I know that I’ll be talking to the next black goat I see.