“God is Self
And Self is God
And God is a person like myself.”
—Victor Anderson
“Every man and woman is a star.”
—Alistair Crowley

From apex point of sex doth flow
The gifts of love that we would know
That lures us ever toward our pride
Which shines as law and does provide
Awareness of our self’s domain;
And knowledge of all things arcane.
A move toward power stirs within
Power shared with other kin.
As waves of passion fill our souls
We grow with wisdom; life’s true goal.
By the Iron and by the Pearl
I claim my being;
I claim my world.1
Like its Iron counterpart, the Pearl Pentacle is a major teaching tool utilized by most lines of the Faery tradition. Whereas the Iron can be said to represent qualities pertaining to the self 2, the Pearl is often thought of as extending these concepts outward and into the transpersonal realm of community, complimenting the Iron with a type of comparative polarity. When taken together, the Iron and the Pearl embody the divine union that is necessary to fully awaken the awareness of our divine natures.
Where the Iron can sometimes be felt as being sharp, frantic, and hot (much as the red hot iron in the blacksmith’s forge) the Pearl is often described as being soft, calm, and cool; a much needed balance to the Iron’s sometimes overwhelming severity. This is, of course, only a generalization; it should be understood that there are as many ways to experience the pentacles as there are people who work with them.
In the style in which I was originally taught Faery, a great deal of time was spent working first with the Iron before the Pearl was even mentioned. On one level this makes perfect sense… if the Iron is about refining one’s personal relationship with the Self, then it seems a sound practice to allow that work to serve as a foundation before jumping outward into the work of building community, a particular lesson that the Pearl has to offer. While this does make sense, it is certainly not the only valid way to approach these tools. In fact it is reported that —on several occasions— the late Victor Anderson3 himself would teach these two pentacles together, sometimes combined into one symbol known as the Copper Decagram4. Here we see yet another example of how fluid our traditional methods really are; a perfect reminder that ours is a living tradition based on shamanic principals, and not a one-size-fits-all system of spiritual instruction. Faery loves paradoxes, and when considering the Iron and the Pearl pentacles we can contemplate one of the biggest of them all: There is only one pentacle. The Iron and the Pearl are not separate, but are instead the same pentacle as seen from different angles.
When we are focused on working internally with the self, we see the Iron in all its fiery glory; its five points representing those qualities that all so often need to be healed in order to claim our personal power. Modern society perpetuates some very unhealthy attitudes toward certain natural qualities and behaviors, and because we are products of that society we often need to “un-learn” or “re-align” ourselves in a balanced and conscious way. Take for example the Iron Pentacle’s point of Pride. It exists in opposition to a larger societal standard that would teach us either to completely subjugate the ego (“Don’t be too proud”, “Pride is a sin”) or to exalt it above all else (“You’re the most important person in the world”, “Every man for himself”). The Iron Pentacle is a method to allow ourselves to achieve a true and personal balance between these two unhealthy extremes; helping us find our own way… our own truth. 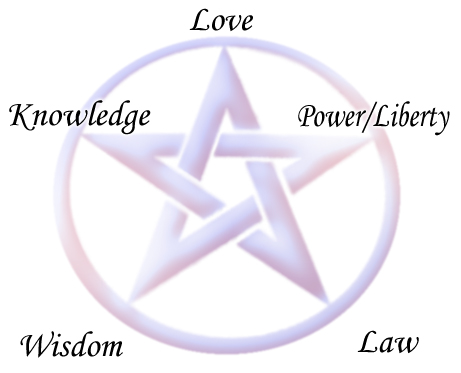 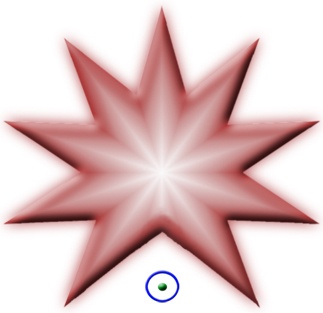 Yet before the pentacles can be safely used to traverse into other realms, it is wise to use them to discover more about our inner landscapes and both the powers and the poisons that reside there. The pentacles of Faery tend to first be used as a sort of ‘psychic diagnostic tool’ that enables us to see more of where we are directing our energies so that we may make informed decisions about the use of our personal power. Between strengthening our individual selves with the processes of the Iron Pentacle, and the community building gifts of the Pearl, we have a tremendous opportunity to claim our human birthright of recognizing our own Godhood.
NOTES:
1. A reworking of a poem published in my book The Stars Within the Earth, ©2003 Storm Faerywolf. Available from www.FeriTradition.org.
2. For more information on the Iron Pentacle, see my article The Iron Pentacle: Understanding the Harmonics of Consciousness, www.faerywolf.com/essay_ironpentacle.htm ©2000 Storm Faerywolf.
3. Victor Anderson (1917-2001) was the original Grandmaster of Faery, and is generally regarded as the founding member of the tradition, although he would not have agreed with that description, seeing himself as simply the then current mouthpiece for the survival of an ancient form of working magic. All initiates of the Faery tradition can trace their lineage through him.
4. Not much is generally known about the Copper Decagram outside of the Faery lineage known as Vicia; the lineage that worked directly with Victor prior to his passing. I have mentioned it here based on personal conversations that I have had with Vicia members.
5. This was true of how I was initially taught, but not all lines of the tradition work in this fashion. As stated before, there are many ways of working Faery authentically.
6. It is my understanding that when working with the Copper Decagram the Pearl point of Liberty is used to distinguish it from the Iron point of Power, as they are used together as part of the same symbol.
7. This particular bit of lore was presented to me as a part of my Faery training and so I have assumed that it finds its origins somewhere in the Bloodrose lineage of our tradition. I would be most interested to hear about the experiences of other practitioners who decide to use this.
Storm Faerywolf2022-02-26T03:17:00+00:00February 18, 2006|Faery, Witchcraft|