Home/Art, Updates/F(a)eri(e) Goddesses of the Primal Elements (2/5)
Previous Next

This week I am happy to unveil the 2nd installment of my Goddesses series. Hail, Tana! 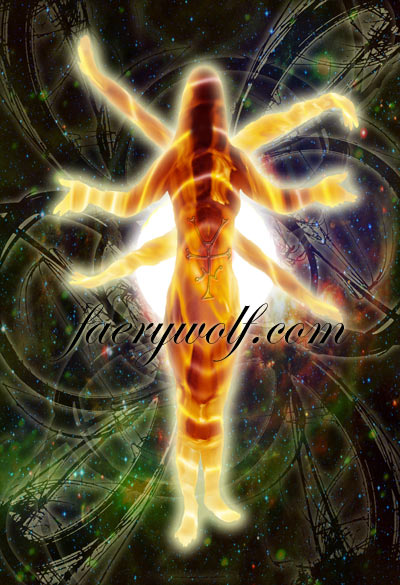 "Tana, The Well of the Liquid Flame" ©2011 Storm Faerywolf

In Feri, Tana is the Goddess of Fire. From the Underworld she rises into the Middleworld in the form of plasma; matter gleaming with chaos and possibility. Her power transforms us, invigorates us… but also burns and consumes. All flames are Her flames; the candle light… the bonfire… the blazing forest… the unimaginable nuclear explosion at the heart of every star… all flames are Her flame.

She lights the way toward truth. She paves the way through lust. She lures us with Her dance of seduction. She frees us by burning through all illusion.

She is depicted here with multiple arms, which to me implies constant movement. She is faceless because –as a being of the Underworld– She is ultimately unknowable in Her entirety. A blazing white-hot star explodes from Her very core, and She radiates outward; giving of Her very body to nourish the Universe and transform it. The old is stripped away and given new form. Through destruction, She creates.

Next week: Heva Leviathan Tiamat, the Goddess of Water.