This is a day later than I had originally intended, but here is my latest piece, “Heva Leviathan Tiamat, The Well of the Watery Abyss” 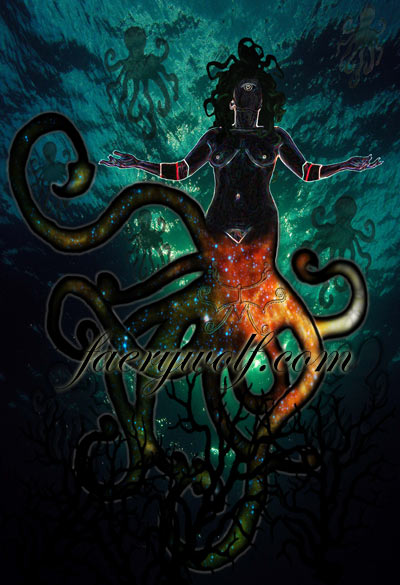 In the Feri tradition, the Goddess of Water is Heva Leviathian Tiamat. She is the primal limitless chaos that precedes life and form. From the cthonic darkness of the Underworld she emerges; rising up into manifestation in the Middleworld as the churning womb of the oceans that birth all life.

She often appears to me as a breaking of primal waters… opening up from the darkness below the waves and rising up to the surface. Sometimes she is the kraken itself; many tentacles stretching from the dark unknown waters below. She is the primal waters of birth; that which gave life to this planet and in fact sustains all life. But she is also the terrible unforgiving waves that lead to destruction.

She rises from the primal seas
With the setting sun she rises
From the madness of the dream
From darkness into form
Which soon gives way
into the deep
deep waters of the abyss.